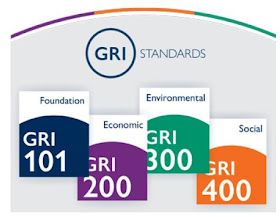 A while back I published an overview of the GRI Sustainability Reporting Standards Exposure Draft. Well, now, the Standards are no longer in draft form. They are in real-live-downloadable-usable-bloggable format. Get your free copy here on the GRI website. Not an awful lot has changed since the Exposure Draft. The main thing is GRIs optimism that this makes GRI a more welcome player at the high-stakes tables where governments, regulators and policy-makers play. As a guideline-maker, GRIs legitimacy was apparently not grounded enough to have equal voice. As a standard-setter, GRI has come of age and has the vote. For corporations who  transition to GRI Standards, though, the changes probably represent:

Billed with just a smattering of hype as the First Global Sustainability Reporting Standards Set to Transform Business, the Standards offer some advantages over G4, but it will take more than this to transform business. The move to Standards is not, and was not designed to be, an overhaul of G4 to deliver a new wow version. No bells and whistles. The move to Standards does not incorporate significant elements which will improve the quality or robustness of reporting, the comparability of reporting, the way companies define and prioritize material issues Aspects topics and how they determine what and what not to report, the use and credibility of assurance practices etc. While there has been some tidying up of the silly bits in G4, and some clarification of the ill-worded bits, nothing substantive beyond the wordsmithing and number sequencing has changed.

Look beyond the numbers
However, you cannot simply change the numbers and that's it. You have to check in with each Standard. For example, one of the disclosures that few reporters actually report fully: GRI 403, formerly Aspect Occupational Health and Safety, including former G4-LA4, G4-LA6, G4-LA7 and G4-LA8:

Disclosure 403-2 is the former G4-LA6.  See the difference in the wording:

The former relates to (1) total workforce and (2) independent contractors. The latter, 403-2, relates to (1) employees and (2) everybody else. This is much clearer in the new Standard but may require a change in the way some companies report.


Beyond these incremental improvemental differences, GRI Standards come with one critical change and one new demand:

One critical change
G4's 46 Material Aspects have now been converted into 33 topic-specific Standards. That's two fewer than in the Exposure Draft. The material topics table would now look like this (except the new Standards do not include such a table): 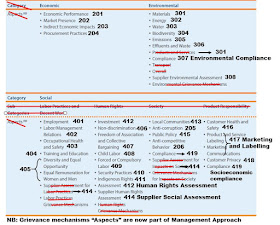 That's a total of three universal standards and 33 topic-specific standards - one for each topic.

All the Standards are in BMW-style series with no subsets: 200 series for Economic, 300 series for Environment and 400 series for Social. All former Aspects relating to grievance mechanisms are moved to the Management Approach Standard, and are not identified as material topics in their own right.

For reporters, this means that if you retain the same material topics, you still might need to revise the indicators you report. For example, if Marketing Communications were a material topic, Core reporters would have selected one of two disclosures - G4-PR6 or G4-PR7. Now, the new Marketing and Labeling topic includes both Product and Service Labeling, which was associated with three indicators - G4-PR3, G4-PR4 and G4-PR5. The new Marketing and Labeling disclosure has been trimmed down to exclude some disclosures that are now General Disclosures, leaving three possible options in GRI Standard 417, only one of which was formerly Marketing Communications (417-3).

Therefore,  as a Core reporter, you now have three options where you had one previously, but as a Comprehensive reporter, you have three mandatory disclosures where previously you had five. This might sound a little confusing, and it is. But for most of the disclosures, all you need to do is switch the numbers. In some cases, companies might have to realign their material topics to the GRI Standards and revise the selection of topic-specific disclosures.

Another point to make here is that the GRI Standards now make it quite explicit that it's just fine to use a different indicator than the ones included in the 33 topic-specific Standards. Standard 101-2.5.3 includes the possibility to report "other appropriate disclosures" if there is no appropriate GRI Standard.

For example, you are a Food and Beverage Manufacturer and have selected Community Investment and Philanthropy as a material topic. Interestingly, philanthropy has never been identified as possibly ever "material" by GRI - this is rather odd, as strategic philanthropy can be a critical part of a corporation's impact on society - and most companies just LOVE to report on this.

Funnily enough, this is exactly one of the material topics selected by PepsiCo in its very recently published 2015 Performance with Purpose Report, which I was just reading. PepsiCo deals with this in an interesting way. Instead of including an indicator in the GRI Content Index, PepsiCo explains: "At this time there are no relevant GRI indicators that directly correspond with PepsiCo’s material aspect of Global Citizenship. PepsiCo monitors and reports on this aspect through the KPIs discussed in the Global Citizenship section."

Now, with GRI Standards, PepsiCo can define its own disclosure of measurement of progress against this material topic, provided these disclosures are subject to the "same technical rigor" as the GRI Standards. In fact, this was also an option under G4, but it was a sort of secret option that no-one knew about unless they asked. Now it's more explicit, and enables companies to select more meaningful performance indicators to reflect progress being made in different areas.

One of the most perplexing aspects of G4 always was the limited flexibility to reflect the diversity of material topics. If your material topic was, for example, Alcohol Related Harm, as it is in the Diageo 2015 GRI Report,  you wouldn't find a related Aspect among the GRI pre-paid lists. What to do? One catch-all option in G4 was to use G4-EC8 - "examples of the significant identified positive and negative indirect economic impacts" for anything that was not covered by another indicator. I have pretty much used G4-EC8 to death over the years. Another option is to use a combo  of existing Aspects. This is what Diageo does:

However, this is not entirely satisfactory, as none of the Performance Indicators that Diageo reports under any of these aspects relate to alcohol in society - they all relate to safety of products manufactured, quality control and labeling requirements. None of these indicators actually address the material issue. Therefore, the only real option for Diageo under these circumstances is to do what we discussed above  - disclose the Management Approach and use a proprietary non-GRI topic and indicator. As it happens, Diageo does have a perfectly fabulous disclosure on this: 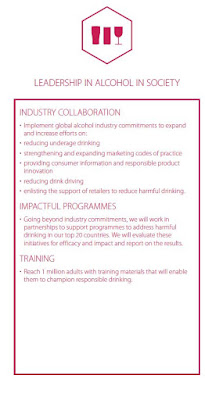 It's a clear strategy statement and targets. This can be used with  G4 to disclose against this material issue. With GRI Standards, the fact that this is now explicit (Standard 101-2.5.3) might make the use of the Standards easier and more relevant for many reporters who suffered from Aspect perplexy.

In the GRI Standards,the GSSB has snuck in something else:

Standard 101 - 3.4. If you refer to the GRI Standards in any way in your report (and there are a set of prescribed statements in the Standards that define how to say you did the GRI thing), then you are obliged to notify GRI - either by sending GRI a copy of the report or by registering the report with GRI on the Standards page. Except that at present, there is no link or form to use to notify on that page. I wonder what GRI will do will all these thousands of notifications ... let's assume 8,000 reports reference the GRI Standards in any given year, that's 30 notifications every working day. And who will know if reporters do not notify GRI? I can understand that GRI wants to keep tabs on use of the Standards, but this is likely to happen only when GRI charge money for certification or use of the Standards logo... forgive me for being skeptical that this is on the cards at some point.


18 months to get ready and steady
In the meantime, GRI Standards will be free and effective for sustainability reports published on or after 1 July 2018. So you have plenty of time to get your disclosures in order. Early adopters gain the advantage of being early adopters. That is, you get first rations of paracetamol. Overall, the language is clearer, the repetition is less and the direction is more logical. You can download all the Standards in one consolidated set at the GRI Standards download center. Whew, that's a relief. And only 443 pages as well.

I am sure that we will see many GRI Standards-based reports published in 2017, ahead of the 2018 cut-off date. The fun is about to start.....


Ahem.. needless to say, I will be very happy to offer the expertise and incredible service of me and my company, Beyond Business,  to help YOUR company transition to GRI Standards and become an early adopter. Paracetamol included free with this service. Contact elaine NOW before stocks run out.